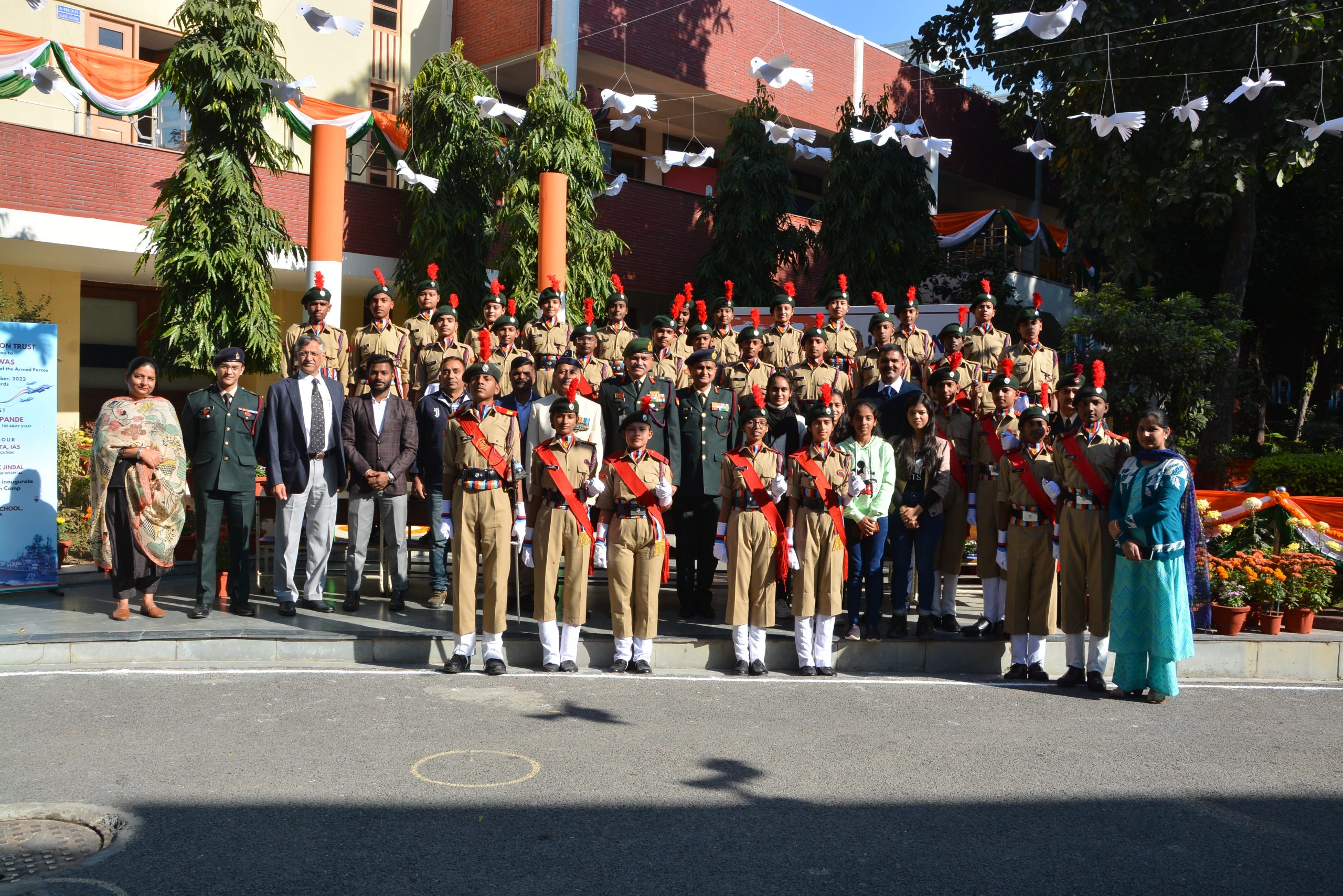 A Tribute to the Brave Soldiers of our Armed Forces

13th December 2022 was a red-letter day for the Salwanians as Salwan Public School, Rajendra Nagar celebrated the 18th Samman Diwas to honour the valiant soldiers of the Indian Armed Forces. The trailblazing event is organized every year by Salwan Education Trust to salute the indomitable spirit, exceptional gallantry and supreme sacrifices of the brave sons of our motherland. Lieutenant General Channira Bansi Ponnappa, AVSM, VSM, Adjutant General of the Indian Army graced the momentous occasion as the Chief Guest. It was an honour for the school to have Mr. Himanshu Gupta IAS, Director of Education, Directorate of Education, the Government of NCT of Delhi as the Guest of Honour.

The spirit of patriotism kindled by Samman Diwas was further set ablaze by organizing the 26th Blood Donation Camp for Armed and Paramilitary Forces and their families. The camp was organized in association with the Armed Forces Transfusion Centre. The Staff, Parents and other members of the Salwan fraternity expressed their gratitude towards the Bravehearts, by donating blood for them. Lt Gen Ashok Kumar Jindal, AVSM, YSM, Commandant, Army Hospital (Research & Referral) inaugurated the camp. Colonel S. Venkatesan, Commanding Officer, Armed Forces Transfusion Centre also graced the occasion as a distinguished guest.

Samman Diwas aimed at inculcating a deep sense of patriotism in the younger generation. More than four thousand members of the Salwan fraternity including students from all nine schools under the aegis of Salwan Education Trust, the eminent Trustees, the distinguished members of the Managing Committees, the Directors, the Principals, the staff and parents of school students witnessed patriotic fervour at its zenith.

In his welcome address, Mr. Sushil Dutt Salwan, Chairman, Salwan Education Trust laid stress on the fact that it is essential to imbibe the core values of the Armed Forces in each and every individual of our country. He emphasized that the Salwanians remember the brave soldiers of our Armed Forces at all times with profound respect and great admiration.

Lt Gen C.B. Ponnappa, AVSM, VSM, Adjutant General of the Indian Army, the Chief Guest motivated the Salwanians to serve the nation selflessly. The epitome of grit kindled a spirit of service in the students and encouraged them to join the Armed Forces. In his inspiring address, Hon’ble Adjutant General of the Indian Army laid emphasis on the importance of co-curricular activities for the all-round development of young learners. Sharing valuable insights and interesting anecdotes with the Salwanians, he touched the chords of their hearts.

The Salwanians paid homage to the Brave Martyrs who laid down their lives for the freedom and sovereignty of our country. Decorated Soldiers from the Indian Armed Forces, Veer Naris and Jawans of the 95th Battalion and 25th Battalion of the Border Security Forces were honoured on this solemn occasion. The school also honoured two Padma Shri Awardees for their outstanding contributions to the welfare of humanity and exemplary service to mankind. Smt. Surrinder Randhawa Memorial Distinguished Teacher Award 2022 was presented to Mrs. Pallavi Rawat, PGT, History, Salwan Public School, Rajendra Nagar for her unparalleled commitment to educational excellence of the students.

A scintillating Cultural Programme – Amritasya Bharatam was presented by the students. Through a magnificent blend of music, songs, dance, theatre, multimedia display, dazzling lights and visual effects, the students showcased a beautiful melange of our rich culture. The spectacular show depicted the great strides made by our country and the progress achieved in diverse fields for building Atmanirbhar Bharat, as the nation celebrates Azadi ka Amrit Mahotsav commemorating 75 glorious years of independence.

In his address, Mr. Himanshu Gupta IAS, Director of Education, Directorate of Education, Government of NCT of Delhi, the Guest of Honour emphasized that for building a progressive nation, it is necessary to imbibe strong values and ethics in children. He averred that schools all over the country should focus on character-building and holistic development. He highlighted the importance of Happiness Curriculum, Deshbhakti Curriculum and Entrepreneurship Mindset Curriculum introduced in the schools of Delhi for empowering the 21st Century learners with essential skills required for creating a self-reliant India.

Maj. Gen. Sanjeev Shukla, VSM (Retd.), Director, Salwan Public School addressed the gathering and thanked the illustrious guests for their inspiring presence. He reiterated the fact that the Salwan Schools are constantly striving to inculcate the fundamental values upheld by the Indian Armed Forces.

‘Mahabhoj’- a unique food fiesta was hosted to honour the guardians of our frontiers. A splendid mosaic of our Unity in Diversity was displayed and cuisines from different states of India were served with a dash of affection.

A visit to the Army Hospital (Research and Referral) was also organized as part of Samman Diwas celebrations. The Salwanians expressed their sincere gratitude towards our brave men in uniform by presenting ‘Patient Welfare Amenities’ for them at the hospital.

Mrs. Priyanka Barara, Principal, Salwan Public School moved the Vote of Thanks. She expressed heartfelt appreciation for the esteemed guests who inspired the Salwanians with their gracious presence.

Samman Diwas endeavoured to sensitize young learners towards the selfless services rendered by the sentinels of our nation who dedicate their lives for our safety and security. The students, parents and teachers got the unique opportunity to interact with the Decorated Officers, Padma Shri Awardees, Jawans and the families of the Martyrs. Students expressed their love and faith by tying ‘Rakshasutra’ on the hands of the soldiers. The presence of the Real Heroes served as a great source of inspiration for the Salwanians.